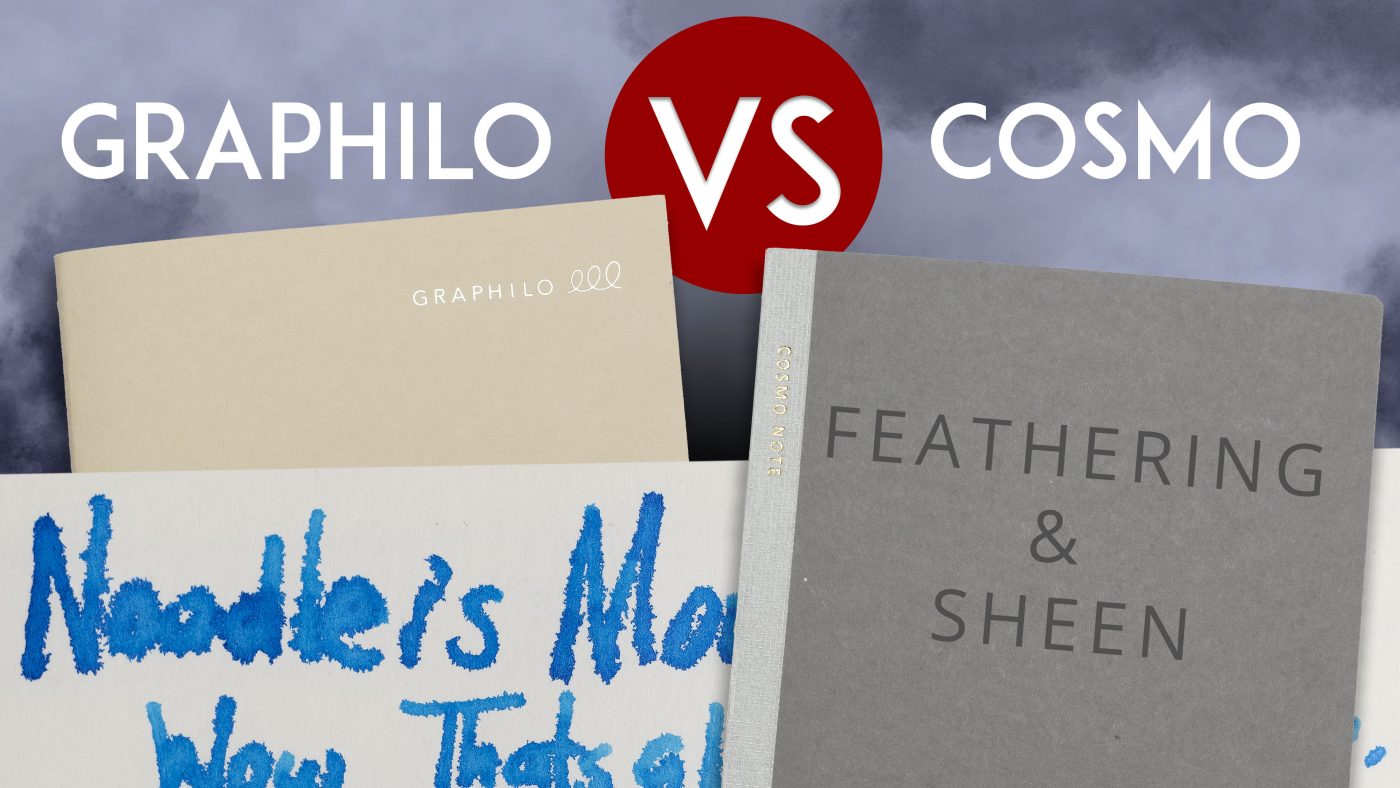 To say that I don’t like Tomoe River paper would be over-stating it a bit, but I’ve never been a huge fan, and with the company making changes to the paper’s formula, I’ve had an extra reason to start searching for good alternatives. The two papers that I’ve heard most about, recently, are Graphilo and Cosmo Air Light. Graphilo in particular is very popular in Japan right now, according to InkyRocks, and Cosmo Air Light claims to have all of the properties that I like in a paper: smooth, thick pages1Thick for a writing paper, but still quite thin compared to a sketching or painting paper, that are very fountain pen friendly.

So, I bought a 64-page Graphilo notebook (blank) and a pair of 176 page Cosmo Note notebooks from Yoseka Stationery to see which one might be a good fit for me going forward. The Graphilo costs about twice as much per page, so I was already leaning towards the Cosmo, but I don’t mind spending a little more if I’m getting a better product, so it was time to start testing them out.

Incidentally, there are also a couple of Etsy sellers who sell Cosmo Air Light notebooks: there’s the Odyssey Notebook from the TarokoShop for $18, and also a wide variety of sizes and finishes (lines, dots, blank, etc) from danika58, starting at $19 (this is the one that I saw reviewed on YouTube by Gourmet Pens that led me to the brand).

I started out with Baystate Blue, which can feather a little bit on cheap paper, but doesn’t feather on decent papers like Rhodia. The Cosmo and the Graphilo both handled it just fine, with no feathering.

Then I tried Noodler’s Blue Nose Bear, which is an odd ink that is designed to feather or spread a bit and create a blue outline around the green ink. On the Cosmo (just like Tomoe River), there was no feathering or spread, but the Graphilo had very heavy feathering.

I then moved on to the two most brutally-feathering inks that I could find in my collection: Noodler’s Monkey Hanger and Noodler’s Brittania’s Blue Waves, both of which are only available for sale in England (specifically, they’re store exclusives at Pure Pens).

Needless to say, the feathering on the Graphilo paper was outrageous. In fact, it was considerably worse than the Rhodia paper that I used as a baseline test.

As it turns out, there was little to no difference in sheening on these papers, but where there was a difference, it was probably that Graphilo that produced slightly more sheen than the Cosmo. It’s hard to tell, though, whether this is just a difference in how evenly the ink went down on the paper… I used a glass pen for a couple of the tests when I should have used fountain pens for all of them.