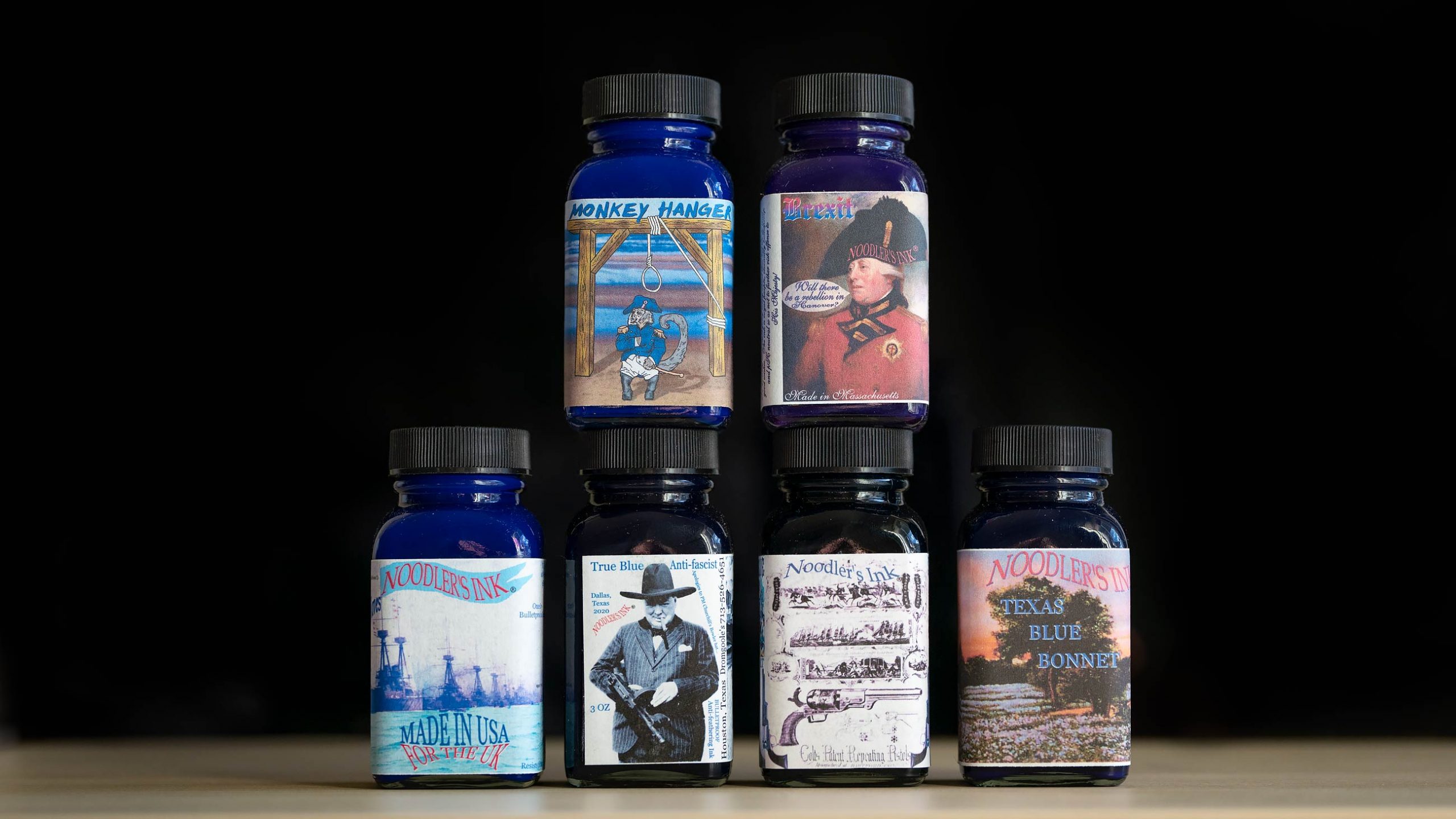 An attempt at a complete list of Noodler's inks that are exclusively sold at a single location.

By Matthew Gore
In Ink TravelsNoodler'sNotes From the Ink Well
on July 17, 2020

Before I had to cancel my trip to Tokyo in April, I had read all about the various exclusive Sailor inks that can be found all over Japan. For some reason, though, it didn’t occur to me that there were exclusive inks to be found in the USA. Of course there are.

I ran across Blackstone’s exclusive “Lemur Lime” at Lemur Ink, and immediately bought it (review here). Colorverse has a couple of Dromgoole’s exclusive inks (NASA Blue and Purple Cosmo… I bought them last week), and Robert Oster has at least one exclusive ink at Vanness (Berry d’Arche… not in my collection, yet).

Then I remembered that Goulet Pens had an exclusive Noodler’s Ink called “Liberty’s Elysium” and when I searched for it, I found that it was not the only one. There are at least three exclusive Noodler’s inks available from Goulet, and of course, that made me wonder how many others were out there.

It turns out that there have been a lot of them. Many of them were made for shops that have now closed. Some were made as small batches and are now sold out, and in some cases, the dyes required for certain inks are no longer available.

But quite a few still exist. These are the American ones that I have discovered so far, including some that may not be available currently. Some inks, like Upper Ganges Blue, used to be exclusive but are now widely available, so I’ve removed them from my list:

I’ll try to forget for the moment that the Canadian border is closed to US residents at the moment and mention that there are some popular Canadian exclusive inks as well.

Some of the UK inks are now readily available in the USA, so I’ve left them off the list. These include Socrates and Mata Hari’s Cordial.

Like many of you, I’m sick of being cooped up at home (or at least, in my own city) and I’m ready to get out on the road. As I thought about these inks, I started imagining a road trip… a long, ink road trip around the country, collecting exclusive Noodler’s inks.

My quest will have to begin with Goulet Pens, of course, because they don’t have a brick and mortar location. And then? Maybe I’ll head for Texas, by way of California…

What Noodler’s Exclusive Inks Have I Missed?

I’m pretty sure that Noodler’s has exclusive inks for shops outside the USA, and I’ve ignored them completely so far. But if you know of ANY Noodler’s exclusive inks that are not in my list above, please let me know!